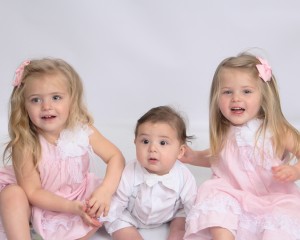 My husband and I married in August of 2008. As I was 36, we tried to get pregnant immediately. We went to a fertility clinic in Frisco in hopes of making sure that this could happen. They recommended we do an IUI immediately with medication. It did not work, and in December of 2008 during a routine examination, they discovered my right ovary was enlarged with a tumor. It was removed within 4 days along with the right fallopian tube. The next year they recommended we go straight to IVF and we did our first one without success. In 2010, we tried our second, third, and fourth with this clinic…. During the last cycle I was hyperstimulated and they still transferred the embryos. Obviously, all four IVF cycles did not work. In 2011 my husband and I looked into adoption, went to seminars, and even attended a full weekend of foster care, but he convinced me we should try one more time. I work in the medical industry and a couple of the oncology gynecologists at Medical City knew my history and recommendeded Dr. Peng. My husband and I met with him in the spring of 2011. Literally everything changed at that point. There was no rush. Dr. Peng wanted to find out everything about my husband and myself. All our bloodwork, tests, etc. He discovered a clotting disorder I have and many other reasons as to why we had not been successful in having a baby. Dr. Peng would not progress forward until he was completely sure I could carry a pregnancy to term. He reviewed all my charts and realized the termination of my embryos and exactly when they should be transferred. In January of 2012, we underwent our 5th IVF with Dr. Peng and according to my history and medical records he did a 3 day transfer which resulted in the birth of my beautiful twin daughters, Avery and Brooks, on October 10, 2012. Dr. Peng had adjusted medication, past history, everything….to ensure this was a success. Now most people at this point would be happy, but my husband and I thought we needed to try for a son. So in the fall of 2013, we started the process again with Dr. Peng for our 6th IVF and were informed over the Christmas break I was indeed pregnant. We were told it was another girl by our OBGYN and we were excited, but due to my age we did the MaterniT21 genetic test and guess what, there was a Y chromosome in there! So our little boy, Victor III, was born on August 16, 2014.

I will sum up Dr. Peng’s amazing success in helping create our family due to his diligence and meticulous methods. He will not rush the process. He will take everything into consideration. I can elaborate so much more on this almost 3 year long process that Dr. Peng and his staff have been on with us, but it would not do it justice. A picture says a thousand words.
Beth C.