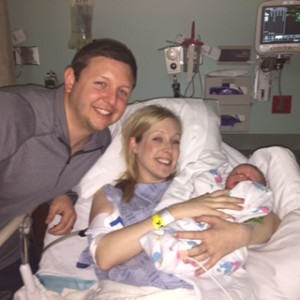 In 2011 we began our journey to start a family. What we expected to be so easy turned out to be the hardest obstacle we have had to face as a couple. After six months of trying to conceive I decided to see my OBGYN to see if there was anything causing us not to be pregnant yet. She ran blood work, did ultrasounds to monitor my cycle, and told me to start tracking ovulation. All of my blood work came back normal, but I was not ovulating. I began taking Clomid to try to trigger ovulation. After four more months of still not getting pregnant she ordered an HSG test to see if my tubes were blocked. The test came back normal also. We had my husband’s sperm tested and all those tests came back normal too. After a year of trying to conceive she suggested we do an exploratory laparoscopy surgery to get a better idea of what may be going on. She came out of surgery and told my husband and mom that she never expected to see endometriosis that bad. I had not complained of any pelvic pain, which should have been accompanied with my endometriosis condition. After healing from the surgery, she suggested if we wanted to get pregnant quickly we should seek fertility options.

In April 2013, we met with a Reproductive Endocrinologist and he was very optimistic about our case. Based on all the tests that had been done, it would suggest I have no problems conceiving. The only test that indicated fertility problems was my ovarian reserve level was low, but still within the means of being able to produce eggs with treatment and get pregnant. We began our first IVF cycle the following month. We got a decent number of eggs, all fertilized and 3 blast. We transferred 2 fresh embryos on day 3 and froze the 3 blast embryos. We were devastated to find out that the embryos did not take. The doctor believed we would have a better chance doing a frozen transfer. Two months later we transferred two frozen embryos and found out we were pregnant! We shared the news quickly with our families only to realize we had not overcome all the obstacles yet. My HCG levels never progressed and the pregnancy was considered a chemical pregnancy/ early miscarriage. The doctor then suggested I may have an egg quality issue. He recommended another IVF cycle, genetically testing the blast embryos, and doing a frozen transfer. Two months later we did our second IVF cycle. We had another decent cycle, getting a good amount of eggs, most fertilizing and 3 blasts. The genetic testing found only 1 embryo was viable. The doctor then recommended we do a third IVF cycle to get more embryos in freezing as he believed this good tested embryo would lead to a pregnancy and we wanted more in reserve for later. Two months later we did our third IVF cycle. Similar outcome as the other cycles, getting a decent amount of eggs, strong fertilization rate, and 2 blast embryos. Both embryos tested good. In Dec 2013 we transferred 2 frozen embryos (1 from our 2nd IVF cycle and 1 from our 3rd IVF cycle) leaving 2 embryos from previous cycles in freezing. We found out 2 days after Christmas that neither embryo took and we were not pregnant. At this point we were extremely discouraged. We were losing confidence in our doctor, fertility treatment, and our dedication to having a family at whatever cost. We decided we would do one more frozen transfer with our doctor and if it did not work we would seek treatment elsewhere.

In Jan 2014 we started preparing for the last frozen transfer. Two weeks before the transfer I found out I had a cyst in my left tube and needed surgery again. We cancelled the cycle and did another laparoscopy. My left tube was clipped, endometriosis removed again, and a hysteroscopy & D&C done to prepare my uterus for better implementation outcome. We planned to transfer our last two frozen embryos the next month. In the meantime we had made appointments with other doctors to have a game plan if this transfer did not work. We met with Dr. Peng on Feb 25, 2014 and were told to cancel our transfer cycle and let him run more tests. The tests he wanted to do were all tests I had read about, asked my doctor about and was told there was no need. We decided to trust Dr. Peng and his treatment plan as it was different than our previous doctor and he was willing to consider all factors of our infertility and not do anything until he figured out what was going on. My Natural Killer Cell level was elevated, I had a blood clotting disorder that could cause embryos not to implant, and I needed more aggressive hormonal treatment when we did the frozen transfer. Dr. Peng was very realistic with us from the beginning, being hopeful, but never giving us false hope. He was upfront that the embryos we had in freezing were not the best quality appearance and why they were the last to be transferred. We did another hysteroscopy and D&C in April 2014 and transferred our last two embryos in June. One embryo was genetically tested good (from our 3rd cycle-boy) and one embryo never tested (from our 1st cycle- gender unknown). We found out on June 19th that we were pregnant! We tried to keep our excitement even kill until we knew my HCG levels had adequately risen, we had our first ultrasound to see the sac and we got to see heartbeat. We did a panoramic test (genetic blood test) at 10wks to make sure we had a viable pregnancy. The outcome certainly would not have changed anything for us, but we wanted to be prepared early on if we would be encountering a difficult pregnancy. We found out on August 7th that the genetic test came back good and we were having a little girl. That meant the embryo that took was the embryo left from our very first cycle that was never genetically tested (because the other one transferred had been genetically tested and was a boy) that our first doctor would never transfer because he said the quality was not as great. We truly had our miracle!

On February 16, 2015 at 11:18am we welcomed our daughter, Kaitlyn Grace Rath. She was 8lbs 1oz and 20.5 inches long. Infertility struggles and treatment is physically, mentally, spiritually, and financially draining. It is hard to understand such a difficult condition that you have no control over. I never realized just how demanding the treatment would be until we started our journey. The countless appointments, shots, and hormonal rollercoaster can be very overwhelming. I recommend couples going through fertility struggles and treatment reach out to family and friends for support and prayer. We did not share our struggles with others for almost 2 years and we felt so alone going through everything. By having a support outlet it helped us keep our spirits high and stay the course of our treatment. We have learned so much about ourselves, our marriage, and our spirituality by facing such a life challenge. We would not change any part of our journey to now have our miracle baby. Every tear shed was worth what we are experiencing now as parents of a beautiful baby girl.

We are so thankful for a friend that referred us to IVF Institute. Dr. Peng was thorough, patient, and realistic with our treatment. He did everything medically possible to give us our little miracle baby. We were honored to be asked to share our story with others and hope that we can help stay encouraged through their treatment.